It is amazing to believe that summer is almost over. It has been one of the quickest summers in my recent memory. Where has August gone? It was just August 16 – my anniversary – when I posted last … and it is already August 20. I think I lost a few days.

Yesterday was my dad’s 80th birthday! Where did the years go? Not only does he not look or act like he is 80 years old, but it is hard to believe that he is actually 80! He is the youngest, sharpest 80-year old you will ever meet. I am so lucky to be his daughter! He is a wonderful man and I am blessed to have him as my dad. Happy Birthday, Dad!

Last night I went into the city to see the fabulous musical duo, JOHNNYSWIM, at the Bowery Ballroom. They were amazing! I have been following them for some time and have really been looking forward to the opportunity to see them live. It was worth the wait! They were funny, the music was fabulous, and the chemistry and connection between the two is absolutely electric. 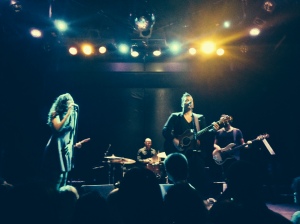 JOHNNYSWIM is composed of a pair of singer-songwriters – Abner Ramirez and Amanda Sudano (daughter of Disco Queen, Donna Summers) – who just happen to now be husband and wife. The couple met in Nashville, Tennessee in 2005 and began writing music together shortly afterward, forming JOHNNYSWIM in 2006. They released their first LP in 2008 and were married in 2009. They just released their full-length debut album (Diamonds) in April of this year (2014). It sounds like the past nine years have been an action-packed and adventurous time for the couple.

Abner and Amanda make beautiful music together – both the music and the lyrics are incredible. They blend folk, soul, and rock in a perfect combination and their voices mix together magically. Amanda Sudano even commented on this in an interview with NPR in April 2014, saying that it is sometimes difficult for the two of them to determine who is singing “because our voices are so similar.”

In addition to the incredible music, the electricity between the two of them is palpable. They have an easy banter on stage and their performance and timing are flawless. The stories that they told to the crowd, everything from Abner’s parents to their engagement, kept the audience mesmerized. They truly are the whole package … not only do they create fantastic music, but they are literally the cutest musical group out there – real, joyful, connected, and visibly enjoying the adventure. 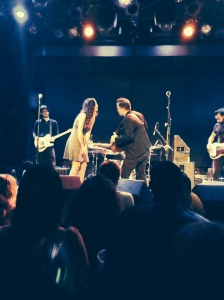 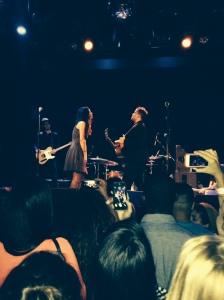 Today’s song is a favorite, but I honestly love all of their music. I have previously posted two JOHNNYSWIM songs as Song of the Day on this blog already: “Home” on December 1, 2013 and “Live While  We’re Young,” on April 29, 2014. I hope you enjoy this song, which they playfully refer to as their “SUCK IT” song. 🙂